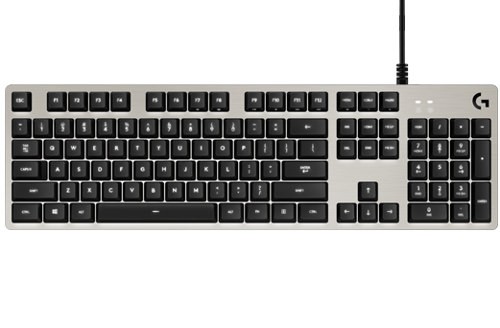 Perfect Balance of Simplicity and Capability

Romer-G is also purpose-designed for precise and clean lighting through the keycap. So, keys are always visible and never distracting, especially during late night gaming sessions (the best kind). That’s how G413 Carbon in elemental red backlighting and G413 Silver in iconic white achieve their premium, focused look

The brushed 5052 aluminum-magnesium alloy top case serves as the keyboard’s backbone. The result is a minimal design balanced with a full set of features. With a focus on high-end finish and performance, G413 is crafted from the highest-grade materials.

For Charging and Data

Convenience and speed are directly within reach. The additional, dedicated USB cable connects the USB passthrough port to its own input for 100% power throughput and data speed. Plug in a device to charge or plug in a mouse to charge your adversaries, without missing a beat.

Use the FN key to control volume, play and pause, mute, game mode, lighting, etc. Use the FN toggle feature in Logitech Gaming Software (LGS) and configure keys to perform media commands by default. Even with a clean and simple design, G413 is packed with the premium features gamers want.*

12 additional keycaps come with G413, so you can upgrade critical gaming keys to be as heroic as your gameplay. Swap them fast and easy with the included puller to remove your Romer-G keycaps.

Press multiple keys plus modifier keys (Control, Alt, Shift) simultaneously in any order and get what you intended with 26-key rollover.

Performance-tuned anti-ghosting gives you reliable control when multiple gaming commands are given simultaneously.

Use Logitech Gaming Software to program custom functions and macro commands on F1-F12 buttons. Make your gamer life easier. Execute complex commands, or unleash a timed series of actions or spells with the press of a button.